I was on Spencer Case's "Micro-Digressions: A Philosophy Podcast" @ADigressions to discuss abortion and ethics, and even the law too, with Christopher Kaczor. 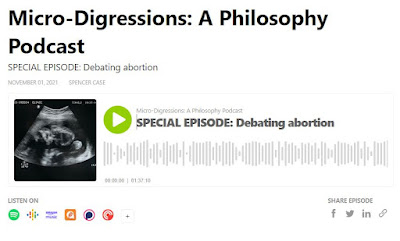 A few recollections about this discussion below the fold:

This was an enjoyable discussion. I do think that I could have said more and better things about what fetuses who have just become, or are starting to become, conscious are like--what their experiences are like--except I am not sure anyone really knows much about that. Since my general approach here is to err on the side of caution, so to speak, my basic perspective is that although we don't know what their experiences are like, if they can have good and bad experiences, then how they are treated matters morally and so they should be aborted only for good reasons: if there are any frivolous later abortions (and maybe there are not: it is doubtful that anyone would get an abortion so, say, they can go on an amusement park ride), those could be wrong, if they are affecting an experiencing, sentient fetus. But these are a small percentage of potential cases to consider, which is why I focus on the more typical cases of abortion early in pregnancy, and so have less-developed thoughts on the details of these rarer, later abortions.

About Christopher Kaczor, I sometimes thought that he wasn't really listening to what Spencer and me were actually saying, but was instead rely on talking points or assumptions about what we would say. E.g., I think I pretty clearly make it clear that my focus is on consciousness and a brain (and nervous system) that supports consciousness, but he seemed to have "heard" me as saying either having a brain or "human-like consciousness" (meaning, something like self-consciousness); when I mentioned just basic consciousness. This type of thing happened a few times, I think, where what I said wasn't heard. I suppose that's how conversations sometimes go though: we suspect people are going to say something that they really don't say.

Kaczor has this phrase something along the lines of "every time a human being has been treated as less than equal, moral disaster has happened." I should find the exact quote, since it's often repeated, but it's worth noting that this quote, when applied to abortion, is question-begging, in that it assumes that abortion is bad (and as bad as slavery, the Holocaust, and other moral disasters), and, relatedly, assumes that (nearly all) fetuses are "human beings" and human beings in the same ways that enslaved people and Holocaust victims are human beings. So I don't know if this slogan is meant to be an argument, but it assumes a lot, and what it should not. To put it another way, this slogan would seem plausible only to people who already believe abortion is evil.

Finally, Kaczor seems to propose our having a closer relation to our bodies than at least I think is correct. E.g., I think he mentioned someone kissing him by kissing his cheek, with the suggestion that to kiss his cheek is to kiss him. But switch the example to kissing him by kissing his hand. If his hand were cut off, he would not cease to exist: he is not his hand or, if he "is" his hand, his hand is a part of him that he can lose. Suppose someone kissed his hand without his knowing it and said "I kissed you." I think he might deny it, thinking that an unperceived kiss isn't a "real" kiss: it's just a touch of the lips. (People do talk this way: "Our bodies connected, but we did not: there was no meeting of our 'souls' here, or intimacy between persons here, so to speak."). In sum, I think that people who think we are, in essence, our minds and not our bodies can explain what's going on here without suggesting that we are, in essence, any of our body parts, especially since many body parts are "used" by our minds to have sensations, perceptions, and experiences, all in our minds.

In sum, this was a good discussion. I hope listeners enjoy it.