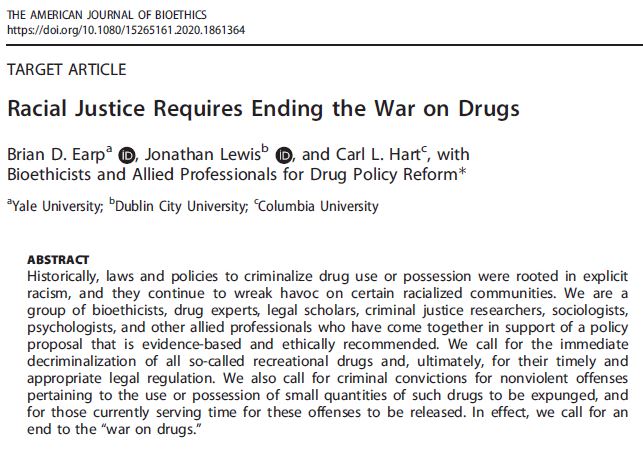 Non-violent offenders serving time for drug use or possession should be freed immediately and their convictions erased, according to research published in the peer-reviewed The American Journal of Bioethics.

More than 60 international experts including world-leading bioethicists, psychologists and drug experts have joined forces to call for an end to the war on drugs which they argue feeds racism.

All drugs currently deemed illicit – even crack cocaine and heroin – should be decriminalized as a matter of urgency, according to this new alliance. Legalisation and regulation should then follow with restrictions on age, advertising and licensing, they say.

They have analysed evidence from over 150 studies and reports, concluding that prohibition unfairly affects Black and Hispanic people, damages communities, and violates the right to life as illustrated by the killing of medical worker Breonna Taylor in March last year.

“The ‘war on drugs’ has explicitly racist roots and continues to disproportionately target certain communities of color,” say lead study authors Brian D. Earp from Yale University and the University of Oxford and Jonathan Lewis from Dublin City University.

“Drug prohibition and criminalization have been costly and ineffective since their inception. It’s time for these failed policies to end.

“The first step is to decriminalize the personal use and possession of small amounts of all drugs currently deemed to be illicit, and to legalize and regulate cannabis. Policymakers should pursue these changes without further delay.”

Their research adds to growing calls for drug policy reform at a time of renewed focus on injustices faced by Black people, and cannabis legalisation for recreational use by a growing list of US states.

The study is based on evidence from existing research into how drug prohibition affects users, communities and human rights, and the impact of decriminalisation by governments.

The authors found that prohibition creates conditions for individuals to commit offences such as burglaries to fund their habit. This lowers life expectancy because people end up in prison, and triggers a ‘multitude’ of health-related costs from unsafe drug use.

Communities are damaged by illicit markets which undermine drug purity, with Black and Hispanic men more likely to end up in the criminal justice system. The war on drugs makes people more vulnerable to violations of their rights including what they choose to put in their bodies.

In contrast, the study highlights the liberal approach of countries such as Portugal where drug-related deaths have fallen and where users are encouraged to seek treatment.

The authors stress that non-violent prisoners found with a small amount of illegal substances should be released.

The study’s senior author Carl L. Hart was Columbia University’s first tenured African American professor of sciences. He is open about the fact he uses recreational drugs and his book Drug Use for Grown Ups is set for publication in January 2021.

For a copy of the paper, visit: https://newsroom.taylorandfrancisgroup.com/embargoed-releases/

A brief video by me on these issues:

Email ThisBlogThis!Share to TwitterShare to FacebookShare to Pinterest
Labels: drugs