Untangling Popular Pro-Choice Arguments: Critical Thinking about Abortion by Hendrik van der Breggen is described as a short book that can "serve as a counterpoint" (p. 2) to our Thinking Critically About Abortion. The book developed out of his Political Animal online magazine article "Untangling popular “pro-choice” claims and arguments concerning abortion" that was posted alongside a selection from our book in a forum on abortion. His book includes other materials that are often developed from his blog posts and newspaper articles on abortion.

The book succeeds at least in making it clear that there are many poor pro-choice arguments. Many pro-choice people, unfortunately, rely on slogans and attempts at "gotcha" moments to support and defend their views and critical thinking shows that these responses are often ineffective. These slogans do not provide rational support for pro-choice views and should not be persuasive to anyone who wants to think seriously about the issues. Readers should scan Untangling's table of contents to see many of these common but bad arguments and ways of engaging the issues.

Untangling would be far better though if van der Breggen "untangled" many of the common arguments and responses from abortion critics who also too often rely on slogans, false assumptions, and simplistic bad arguments. A more "fair and balanced" discussion of the many bad arguments given on the issues from all sides would have improved the book since informing abortion critics that they often have bad arguments, with the goal that they adopt better arguments, is a valuable task.

Untangling's weaknesses concern how it engages deeper, more challenging philosophical issues. It often assumes things that need to be argued for and the quickly-developed arguments given on more controversial issues are weak. Here I'll briefly review some of these weaknesses, as they present themselves in the book. 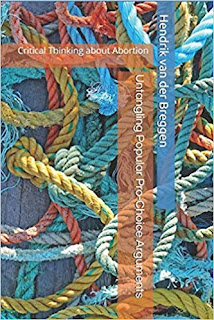 First, from the beginning (p. 2) and throughout the book van der Breggen seems to refers to any zygote, embryo (and fetuses) as a "child." For a variety of reasons, one might reasonably believe that that term just does not fit: it's a misuse of the word because embryos just are not "children."

The problem with this word choice or conceptualization is that it's emotive and potentially question-begging: since children are wrong to kill, to call an early fetus a "child" is basically to assume that it's wrong to kill.

Indeed, van der Breggen describes the stages of a human being as "infant, toddler, child, adolescent, adult" (p. 22, emphasis added), which at least seems inconsistent with his claim that any beginning fetus is a "child." (Furthermore, this is incorrect since someone's baby is their child.)

Second, van der Breggen argues that "individual human life begins at fertilization" (p. 7) but does not use critical thinking to observe and address important ambiguities in the phrase "human life" and "when life begins."

It's plausible that biological human life begins at conception (or close after), but many argue that this isn't what really matters: what matters is when what is sometimes called biographical human life begins. To better understand this concept, imagine a 30-year-old is in a major car crash, their brain is very much damaged such that they are totally unconscious, in a coma, yet their heart keeps beating and their lungs keep breathing for 10 years, and then their body died "naturally" yesterday. When did their "life" end?

Their biological life ended yesterday, but their biographical life ended 10 years ago, when their mind or consciousness ended. "Brain death" is well-known, but "brain birth," which is related to the beginnings of a biographical life, is a less well-known concept, but the concepts of "brain birth" and "biographical life" (as well as, in general, psychological theories of personal identity) are appealed to argue that "human life," in a morally significant sense, does not begin at conception; rather human life, in the sense that matters, morally, begins when consciousness starts, which is much later in pregnancy, after when at least most abortions occur.

The point is just this: there are subtleties and complications here, such as with the common "human life begins at conception" claim (and the mistaken assumption that this would prove that abortion is often wrong), that van der Breggen doesn't address. Critical thinking helps us understand and see what might and might not follow from the different claims expressed by that phrase. Critical thinking and understanding the more basic abstract philosophical issues helps us see that the issues aren't as simple as many people think they are.

In Thinking Critically About Abortion, we argued that persons are psychological beings: persons are, roughly, conscious or minded beings. This is a modification of John Locke's view on personhood.

van der Breggen argues that zygotes, embryos, and fetuses are persons from conception because they have a capacity for the type of consciousness found in "typical" adult human beings: they are the kind of beings that are conscious in those ways.

To better understand this sort of view, we could observe that this description applies to human embryos and fetuses, but not, say, those of cows, pigs and chickens: they aren't that "kind" of being or have that capacity: 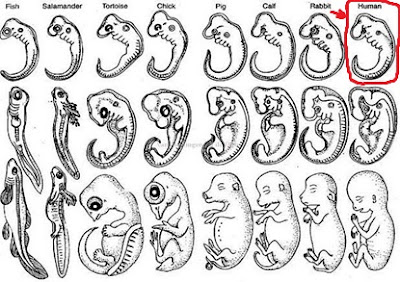 He supports his view with many quotes from Francis Beckwith and Robert George, who favor this view. But they might not have good arguments for their views, as I have argued elsewhere, so these appeals may be weak.

The claim that if something (or someone) has a capacity for consciousness that makes it a person is dubious on its face though. Consider some seemingly parallel reasoning (a common strategy for critical thinking):

So, although there is much more to say about this, it seems to me that van der Breggen's defense of thinking that zygotes, embryos and early fetuses are persons is underdeveloped and not well-defended. Also, his objections to a Locke-inspired view of personhood, which appeals to consciousness and psychological connectedness and continuity over time, resulting from memory, are weak.

(To think further about personhood, a theory of personhood needs to at least explain and account for these:

5. The Right to Someone Else's Body

Finally, it has been famously argued by Judith Thompson that even if fetuses are persons with the right to life, the right to life is not a right to someone else's body, even if that body is needed for that person to continue living.

So, it seems to follow that a woman could not allow a fetus to use her body, and so abort that fetus, yet not violate that fetus's rights to life (which we are assuming fetuses have, for the sake of argument).

Thomson makes her case using many imaginative examples which van der Breggen observes are often quite different from pregnancy.

This analysis is appropriate yet I do not think that van der Breggen makes a convincing case that fetuses (or anyone) indeed have a moral or natural right to anyone else's body, even if they need that body to live.

But these are bad analogies to pregnancy.

First, the chance of a pregnancy resulting from any act of sexual intercourse is, or can be, very low to none, depending on the details.

Second, there is nothing that someone can do to "reverse" the consequences in the cases van der Breggen mentions: it's not like one can "undo" a fire or cancer or a gambling loss.

So, for example, if you consent to buy a house, even in an area with high crime, you don't consent to being burgled, and you don't just have to go along with a burglar being in your house; and you can restore things to as they were, as best you can, if you are burgled.

So, in sum, while there are indeed complications with Thomson's arguments or how many people (perhaps mistakenly) understand them, I don't think that van der Breggen successfully explains why an embryo or early fetus would have a right to the woman's body, or the woman is otherwise obligated to provide for that early fetus. This is especially the case if, in fact, and contrary to what he argues, an embryo or early fetus is not a person.

It is notable that van der Breggen seems to think that abortions of (comparatively rare) pregnancies that result from rape are also wrong. This, at least, makes sense, since if embryos and early fetuses are persons with the right to life, their origins wouldn't change that fact.

In conclusion, there is much of the book I haven't discussed here. I would encourage readers to first read "Untangling popular “pro-choice” claims and arguments concerning abortion," see what they think and then, if they want more, to check out the full book.

Then please come back here to let me know what you think of my comments and criticisms here. Attempting to think critically about these important issues, and modeling that for others and encouraging that is what's needed, and I commend van der Breggen for seeking that goal.