Someone wrote a response to my 1000-Word Philosophy essay on abortion, entitled "Nathan Nobis' Summary of Pro-Choice Arguments." I wrote brief a reply and twice posted it on their blog, but it twice "disappeared" (. . but it might have returned, so I really don't know whether it's posted or not), so I post this reply here since I did take the time to write it up.

See below the fold, please. 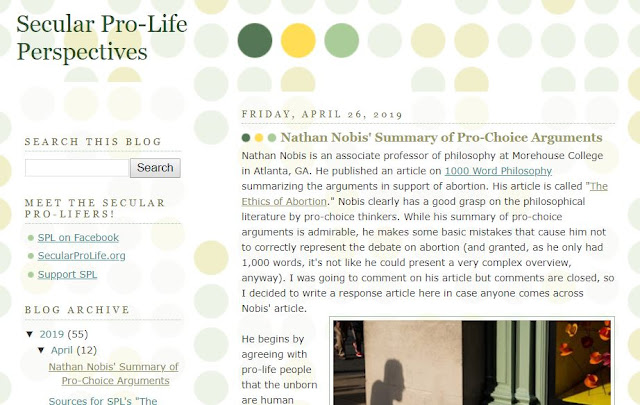 Thank you for this thoughtful and detailed reply, which someone alerted me to. I appreciate your engaging this short essay.
In quick reply, I'm not sure you have (yet) identified some "basic mistakes" with my article, since many of your replies seem to consist in stating contrary points of view on various issues, but not doing a whole lot to really support those contrary points of view: or at least not enough that would likely convince a disinterested observer. So, my reaction is that, basically, much more would need to be said to really support your responses. [Update: another part of the response perhaps is a disagreement about which arguments should be discussed, given the intended audience and what can be effectively presented in new words, as well as a disagreement about which arguments "out there" have been "plausibly" presented.]
5.
Concerning argument 5, you state that the "fetus plausibly does have a right to the use of the uterus, considering that the woman created the fetus and placed the fetus in a state of dependence upon her . , which grounds an obligation of care from the pregnant woman to her child." There are details here about what's being said, but a fair question is: why think this? Why exactly would she have this obligation? This appears to be mostly just an assertation, and there are a lot of details here that would really need to be engaged to support it. Actually, the principle proposed about 5 very much appears to be question-begging. Suppose I create a plant, or a culture of cells, that didn't exist before. Its existence is dependent on what I did. Do I have obligations toward the plant or blob of cells? No. So this type of thinking only seems to work when the "created" or dependent thing is already wrong to kill, which is what's at issue. If this isn't the case, some subtle thinking would be needed to show that.

(I have a short article in the American Journal of Bioethics on this topic called "Abortion and Moral Arguments from Analogy": https://www.academia.edu/823798/Abortion_and_Moral_Arguments_From_Analogy ).
4.
Concerning argument 4, the objection to response 2 misses the objection, which is based on a (metaphysical) view often called "unrestricted mereological composition." (Ted Sider has a book on four-dimensionalism that discusses this view). The objection is not that, considered in themselves, sperms or eggs have valuable futures. This view is basically that any collection of objects is itself an object: to put it another way, there are single objects with parts that don't touch. This view implies that there are *single* things such as an "egg-and-a-sperm-that-would-fertilize-it" and so those things would seem to have valuable futures also. (For discussion, see the cited paper by Norcross).
A further, related concern about Marquis is that if we couldn't be merely physical objects (that is, physical objects with no, and having had no, psychological properties), then we couldn't have been early fetuses, and so an early fetus couldn't have a future like our's. (For an introduction that's relevant to that see "Origin Essentialism: What Could Have Been Different about You?" and the personal identity article by the same author: https://1000wordphilosophy.com/2014/04/28/origin-essentialism/ )
2.
Concerning argument 2, about persons, I will just observe that there was no "question begging" involved in what was said. One way of *reasoning towards* such a definition of what persons are (or what it is to be a person, or what makes something a person) is to reflect on what makes us persons and what (if anything) would end our personhood. We can then take those insights and apply them to harder cases, and so there is no question begging. (For a description of these methods of developing a theory of personhood that explains cases, see this if interested: "Early and Later Abortions: Ethics and Law" https://www.nathannobis.com/2018/08/early-and-later-abortions-ethics-and-law.html )
Concerning the other issue about argument 2, such as how to explain why racism, sexism, child and baby abuse, animal abuse and other wrong actions are indeed wrong, I suggest at least observing what arguments are actually given for why these are wrong. It appears there are far simpler explanations than what's suggested: e.g., that anyone conscious or sentient has basic rights or equal consideration of interests and so forth. If all major moral and social-political theories are in total error in trying to explain why various wrong actions are wrong, that should be pointed out.
1.
Finally, about argument 1, it appears to be only *asserted* that the right to life, or properties that entail the right to life are “essential” properties. (And it’s assumed that *we* exist at all times our bodies exist too). Now that might be true, and it might be that being rational or having a “rational nature” is an essential property, but it needs to be explained why that would be so: it’s easy to assert or insist that, but harder to articulate really good reasons why that is. That was noted in footnote 2:
https://1000wordphilosophy.com/2016/03/07/the-ethics-of-abortion/#_ftnref2
And here is some further discussion:
https://www.nathannobis.com/2018/09/reply-to-christopher-tollefson-on.html
OK, I hope these quick, incomplete replies are interesting and helpful. Again, they are quick, so I may have missed something, but, again, the basic responses is that more often needs to be said, as is often the case with everything!
Nathan Nobis
Also: