A Letter to the Editor on Abortion

A letter to the editor: "Dear Decaturish - Thinking Critically About Abortion" 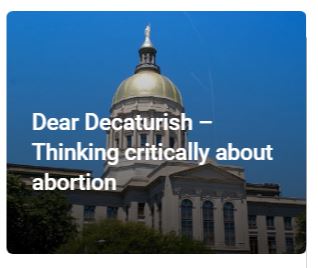 Two additional readings on the issues:

I’m a philosophy professor who specializes in medical ethics and I teach and write about the ethics of abortion. So I am very familiar with the medical, legal and – most importantly – ethical or moral issues related to HB 481, the so-called “heartbeat bill” that would effectively ban abortion in Georgia. At least hundreds of other philosophy, ethics and law professors in Georgia teach these ethical debates about abortion: they are also, to varying degrees, experts on the issues.

To begin, people often ask “When does life begin?”

But what do you mean ‘life’?

Bacteria, mold, mosquitoes and carrots are all ‘life’ – they are alive – but they are not at all wrong to kill. Just because something is alive or life doesn’t mean it’s wrong to kill.

To answer the question though, since a living sperm fertilizes a living egg, the answer is that life, or a living organism, begins at conception. But, again, that there is life does not mean, or even suggest, that that life is wrong to end: it depends on what, or who, is living.

But, again, what do you mean ‘killing’?

Since the woman or girl considering abortion does not want a living baby, she’s considering doing something to the growing fetus to prevent that. But that fetus is living: it’s not dead and is not some inert matter. And making something living not living is killing that thing.

But, again, not all killing is wrong: much killing is uncontroversially not wrong, like the killing of microorganisms and fleas and plants. So just because there is killing doesn’t mean or even suggest that what’s done is wrong.

‘But this is killing something human!’ some respond.

What do you mean ‘human’?

‘But this is killing a human being! And it’s wrong to kill human beings!’

Now we have an argument that requires some deeper thinking. It is often wrong to kill human beings, but we can still seek to understand by asking ‘why think that?’

Why is it wrong to kill us? It’s not just because we are alive or biologically human, as we’ve seen.

Some propose that killing us is wrong because we will miss out on the goods of our futures – our friends and family, our accomplishments, good experiences – which we are currently looking forward to. This explanation is often understood in terms of us being persons, beings that are conscious and aware, with thoughts, feelings and personalities.

This explanation of why killing is wrong (and so who or what is wrong to kill), however, doesn’t apply to fetuses, especially at early stages. Facts matter for morality. Fetuses haven’t developed the brains and nervous systems necessary for being conscious with thoughts and feelings. They cannot, in any way, be aware of their futures: they aren’t aware at all, yet.

Early fetuses are not ‘like us’ in arguably important ways. Given this, some argue, with reflective reasons, that abortion – especially early in pregnancy  – is not wrong.

Whether this argument is sound or not is less important than being engaged in the process of understanding and thinking critically about the issues. We are trying to explain why our views might be correct. And most importantly, since we might be mistaken in our moral arguments, we are open to learning more and improving our views, in light of better arguments.

Currently, lawmakers seem to have little interest in this intellectual and moral engagement. But important decisions require deep understanding and knowledge of the relevant facts and arguments. Disrespecting this requirement is not just unwise and imprudent, but just wrong.

Most philosophy, ethics, law and critical thinking instructors would be happy to share their understanding and skills to help anyone think more productively about these issues. It’s our educational, civic and moral duty: we’re here to help. And, although I can only speak for myself, given my trained understanding of these complex matters, it is clear that the lawmakers who developed and have supported HB 481, and the Governor, would greatly benefit from taking some of the many courses offered on the issues. See you in class, I hope!