To motivate the theory, we might begin here, with this activity:

1. Think of some actions done in other cultures that you, or many of us, are likely to judge as morally wrong.


Write and/or discuss: make a list of these topics.

2. Imagine someone responding to our thinking that these actions are wrong with a reaction like this:

Question: do people sometimes say things like this? When? About what topics (other than those that you listed above)? What else do they say along these lines?

Moral theories try to explain why actions are wrong and not wrong, what makes actions wrong or not wrong (utilitarianism is a moral theory; Kant's categorical imperatives are moral theories, etc). Simplified, "Relativism" is this theory:


If the majority of people in some society approve of doing some action, then that action is permissible in that society. If they disapprove, it's wrong.

What makes an action wrong, in a society, according to this theory?


If the majority of people disapprove of it.

What makes an action permissible, says this view?


If the majority of people approve, or don't disapprove of the action.

What makes an action obligatory, on this view?

If the majority of people disapprove of people not doing the action. (perhaps?)

We can simplify the view even more:

A society's majority view or approval determines whether actions are wrong or not. 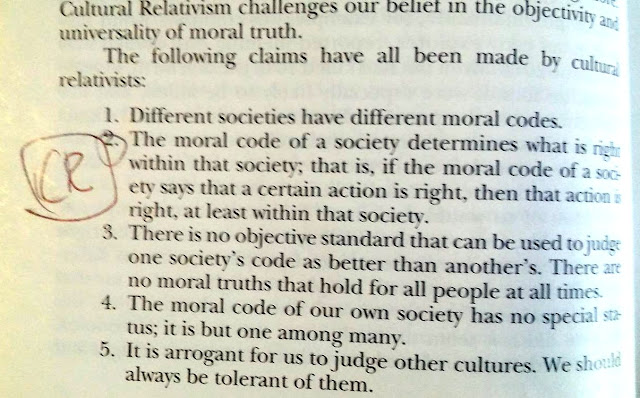 This post or handout here is based on the understanding of Cultural Relativism that Rachels present, and many of their arguments.

4. To recap, here's why what some people sometimes say suggests they might accept Cultural Relativism, as least in the moment:

5. Why might someone think that Cultural Relativism is a false moral theory?

a. The majority isn't always correct:


So, e.g., if the majority in some culture approves of an action, then - according to cultural relativism - it must be permissible in that culture (e.g., female genital cutting is permissible if the majority are OK with it), yet the action is really wrong; and - according to cultural relativism - the majority's attitudes could make other actions obligatory (e.g., that women must submit to men in every way; that everyone must agree to some leader's plans, etc.), yet there are no such obligations.

d. There's been some real, objective progress (and decline!):

This argument can also be developed with some potential examples of cultural decline, if there are some ways in which society has overall come to accept objectively worse moral views: if cultural relativism is true, any change to a majority moral view always results in a change to a correct view, which isn't true.

These are just a few arguments in support of thinking that the moral theory called "cultural relativism" is false. They can and should be explained in greater detail to better evaluate them.

6. Why might someone accept the moral theory Cultural Relativism?

People might accept the moral theory Cultural Relativism out of a desire to be "tolerant" and "respectful" of cultural differences. This motivation runs into a bit of paradox, however. Consider this claim:


We should always be tolerant and respectful of everything that all other cultures do.

A better thought about tolerance and respect is this:


If a society does something that is merely different, but not wrong, then we should tolerate and respect what they do.

Sometimes we find different ways of doing things a bit "scary," and we mistakenly interpret that as "wrong." We need to get over that! Just because another culture has a different practice from us does not mean that what they are doing is wrong. If it is wrong, we can try to show that by appealing to Kantianism, or utilitarianism, or some other theory that proposes that what makes actions wrong or not is not merely whether we believe they are wrong or not.

Another good thought about tolerance and respect is this:


If a society does something that is different, but wrong, then we should not tolerate and respect what they do.


Now, this doesn't always mean we should go actually go try to do something in that society to address the issue (but perhaps someone should, and someone else is in a better position to do so than us). But we can at least think that the action is wrong and express our disapproval of the action and why we think it shouldn't be done.

Another argument in favor of accepting the moral theory called Cultural Relativism is based on the observation that many cultures sometimes disagree about what's wrong and what's not wrong. Does everyone disagree about everything? No. Do we sometimes agree about some things? Yes. Trying to determine exactly how much we disagree, since we also often agree on many things, is challenging. But this observation often given as a core premise in favor of the the moral theory Cultural Relativism:

So we have an argument like this:
The problem is the connection between the first premise and the conclusion. It is reached (that is, the argument is made logically valid), by a premise like this:
This assumption is false: just because people disagree doesn't mean there is no fact of the matter. It might be that one party to the disagreement is just mistaken. For example, there was (and is!) disagreement about the shape of the earth. But the Earth is not round for some cultures and flat for other cultures. Some believe it's flat, but believing something to be true doesn't mean it is true. (If you merely believe you are a billionaire, that does not mean that you are, in fact, a billionaire). Many more examples make the point that disagreements don't prove a lack of universal facts or truths. So this argument fails: it gives no good reason to accept the moral theory called Cultural Relativism.

"Hey, that's their culture! That's their practice! That's their tradition! And so it's OK! They are OK with doing that in that culture, and so it is OK for them to do it, so you shouldn't judge, or think that what they are doing is wrong!"


The following is some further discussion of matters related to cultural relativism:

People sometimes accuse each other of being Cultural Relativists. This is usually taken to be an insult, and the insults often fly along party lines.


"Conservatives" sometimes accuse "liberals" of being cultural relativists, since about some actions, "liberals" think that people should be able to do what they want (e.g., engage in various sexual or romantic practices; use various illegal drugs; have an abortion, etc.). It might be that liberals are claiming if someone, or group of people, want to do something - they are OK with it being done - it's OK for them to do it, and that kinda sounds like relativism. (Or they might just be saying that some potentially immoral actions shouldn't be criminalized). More likely, however, "liberals" are arguing this:

"These various actions (such as...) are actually not wrong, although there is a long tradition of them being mistakenly believed to be wrong. But they are not wrong, and so if people want to do them, that's OK, since they aren't doing wrong: people should be able to do actions that aren't wrong, if they want!"

Understood this way, "liberals" clearly do not accept cultural relativism. They do not think that the majority is always right.

"Conservatives" sometimes appeal to the Bible for moral guidance. The Bible, however, seems to contain some bad moral guidance concerning, among other things, say, inappropriate and excessive violence, to put it mildly. When "liberals" observe this advice, and so argue that the Bible isn't an infallible source of moral guidance, "conservatives" sometimes respond, "Well, that was the culture at the time; they were just following their own standards, and so what they did back then wasn't wrong, and so Biblical guidance is still always perfect."

This sounds like an appeal to moral relativism. Greta Christina has developed this argument, and you should read what she has to say.

Note: This discussion has assumed that we understand what cultures are. It would be worthwhile to think about what cultures are though, and which cultures each of us are members of. We probably are all members of many different cultures, all at the same time. These different cultures also probably also generally approve of different things: e.g., "college culture" might approve of doing X, whereas a religious culture might disapprove of doing X, and so on. In these cases, what is someone who is a member of both cultures (e.g., a religious college student) to do? Thinking through how we might answer this question might reveal even deeper problems for Cultural Relativism.

Another note: Very different views are sometimes called "cultural relativism" so we need to be attentive to what people mean when they call something "relativism."

Also, social scientists (e.g., sociologists, anthropologists, psychologists, etc.) sometimes call "cultural relativism" the view that for the purposes of learning about a culture, we should "suspend" any moral judgments about the culture in the course of our investigation. This is likely a useful method: if, say, someone wanted to try to understand what causes some people to be attracted to, say, White Nationalism or the KKK, it might be most effective, for the moment, to set aside the moral judgment that these groups are evil. This is just a strategy for social science investigation, however, and the technique can be set aside after the research is done and our moral judgments are brought back into our thinking, e.g., "The KKK is a wicked organization, but new research gives us a better idea why some people are attracted to it, so now we are in a better position to intervene and lessen the chance that people will want to join hate groups and be part of that evil." The point is that this social science strategy is fully compatible with rejecting cultural relativism as a moral theory and thinking that some, many, actions are profoundly wrong in any and all cultures they occur.

To be continued!
A short video on some of the above content: