I was recently asked to make an audio-narrated PowerPoint that reviews this article of mine, to be used in a UCSD course on non-animal-based medical research:

The harmful, nontherapeutic use of animals in research is morally wrong.

This PowerPoint with audio narration is available for download here. 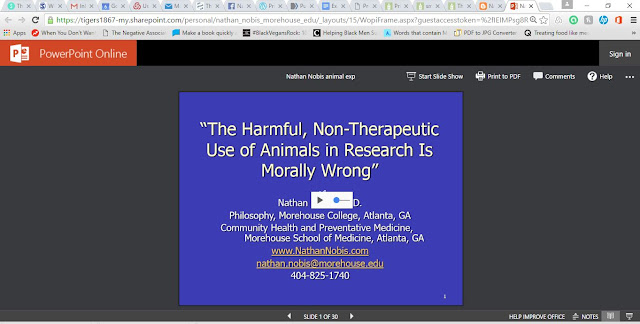 Information on this course is below the fold.

For scientific, ethical and economic reasons, cell-based, computational and other non-animal study methods are being increasingly developed and implemented by biomedical researchers. Additionally, federal regulations and guidelines state that researchers proposing animal-based methods in research must demonstrate that they have considered the methods that can avoid or minimize animal use. In some cases in the U.S. and abroad, the use of alternatives to animals in experiments is required. Yet, there is currently little training on the availability and efficacy of these critical research tools and reports show that researchers and administrators are often not familiar with these techniques. This course will prepare the students for entering biomedical research fields and bridge an important gap in the current training. This course is intended for undergraduate and graduate students enrolled in biomedical sciences programs, university and industry faculty and staff researchers, bioethicists, grant reviewers, and Institutional Animal Care and Use Committee coordinators and members. No prerequisite is needed. Course Goal and Objectives The development and utilization of non-animal methods (often called “alternatives”) in biomedical research, testing and education is a burgeoning field. The course will introduce students to the range of non-animal research methods available, their efficacy, how to identify and implement them and policies affecting their use.
Course Number: BIOL-40313   Credit: 3 units in Biology

Weekly assessments
Following each week’s lecture(s), student will complete quizzes to assess their comprehension of the content covered.  Quizzes will include six questions, four multiple choice and two short answer.

Q1. Some people argue that animal research is justified by its benefits: the benefits outweigh the harms. What are some potential challenges with this argument?
A.      There’s no obvious way to quantify the benefits and harms.
B.      No all research is beneficial to all humans.
C.      The argument just assumes, without argument, that it’s not wrong to harm animals for human benefit.
D.      All the above.

Q2. Some people argue that animal research “necessary”, and so is not wrong. What are some potential challenges with this argument?
A.      Whether an action is necessary or not depends on what you are trying to achieve.
B.      Just because an action is necessary to achieve some goal, doesn’t mean that action is morlly permissible.
C.      At least some, perhaps much, animal research is not necessary to positively impact human health problems: there are other ways to do that.
D.      All the above.

Q4. Some argue that animal research is not wrong because animals are not rational or not moral agents, that is, make moral decisions. What is the least controversial objection to this argument?
A.      Animals are rational, and they do make moral decisions.
B.      Rational beings make the moral rules and they can do what they want to non-rational beings.
C.      Babies and senile people are not rational or are moral agents, but harmful experimentation on them would be wrong, so just because something or someone isn’t rational or a moral agent doesn’t make harming them morally permissible.
D.      Human beings are not wrong to harm because they are rational or moral agents.

Short answer
Q1. Why might animal research be wrong even if animals don’t have “moral rights” or are “equal” to humans or as “important” as humans? That is, why are those concerns distractions to the basic moral questions about animal research?

Q2.  What are some reasons why harmful, non-therapeutic experimentation on you might be morally wrong? Why might some of these reasons apply to animals?